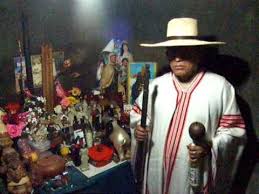 They will clean the soul and if needed return the soul to its body. This could be through exorcism of spirits that are believed to cause the problem.
Curanderos believe most physical illnesses are symptoms of emotional or mental illness. Mind, body, and spirit are all treated together.

Ill Wishing
Long ago people often blamed bad luck on ill wishing. If two people argued and later one got sick, had an accident, or some other stroke of bad luck the other person was suspected of ill wishing.

More so, if one said, “You’ll be sorry”. Those three words were taken seriously and anyone who uttered them was immediately suspected of witchcraft.

Sometimes arguments weren’t the cause of suspected ill wishing. If someone had a good deal of good fortune but it suddenly went away, they believed their neighbors had secretly ill wished them.

Ill wishing could be cured by finding a witch or cunning folk. Often the cunning man or women or witch would break or neutralize the ill wishing with a charm. If the ill-wisher wasn’t known divination could be used to reveal their identity.

WHO THE HELL IS MARI WELLS

Vampires, Werewolves, and The Undead

My Mom Blogs About Vampires